“The Thymio robot, along with the Techykids online Thymio courses, is a wonderful tool for teaching and learning engineering thinking and design. The Thymio robot is remarkably versatile, especially thanks to its ability to interface with Lego pieces for more complex structures and motions.” – Purdue University Engineering Review

Where are the TechyKids now? 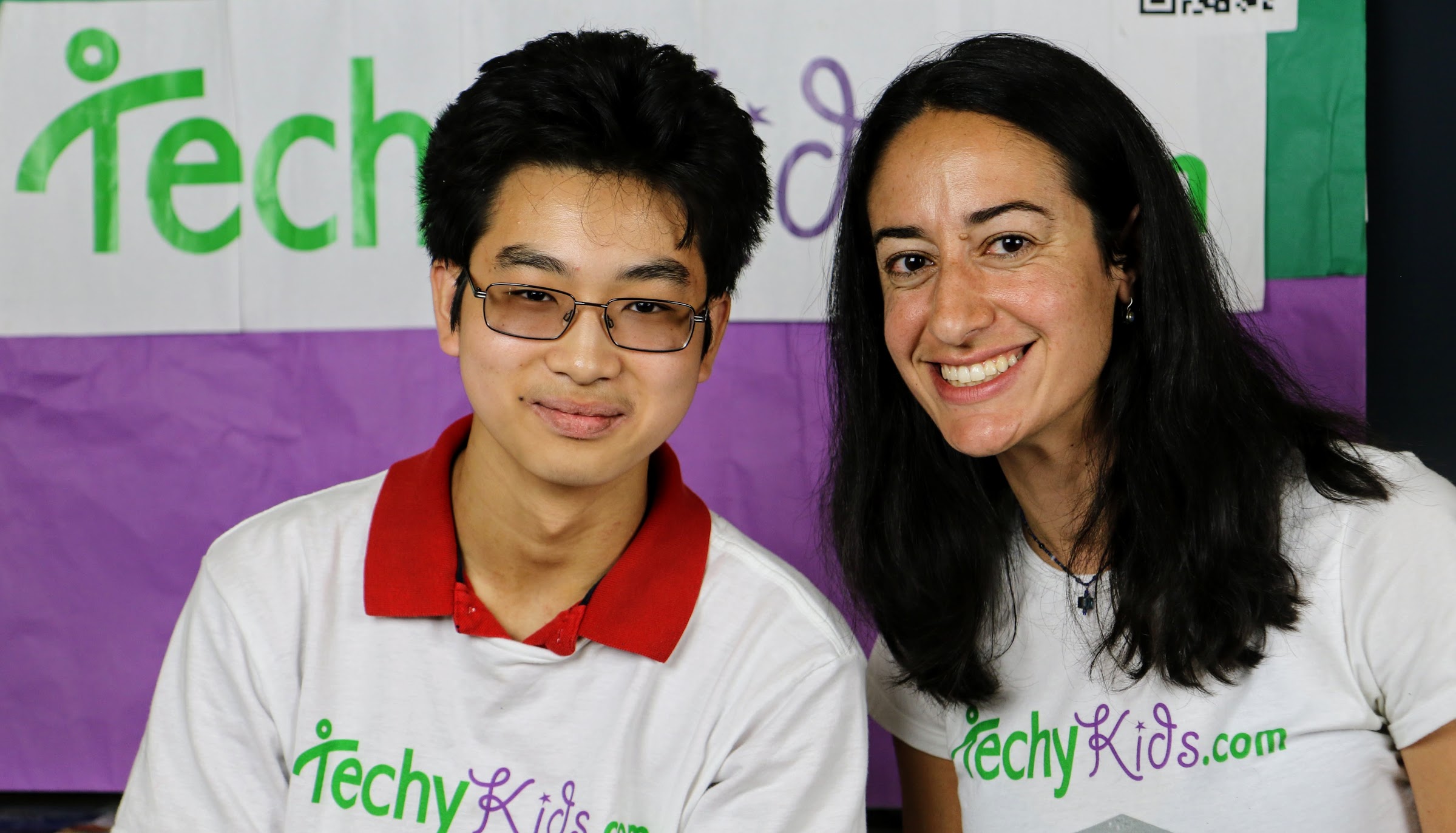 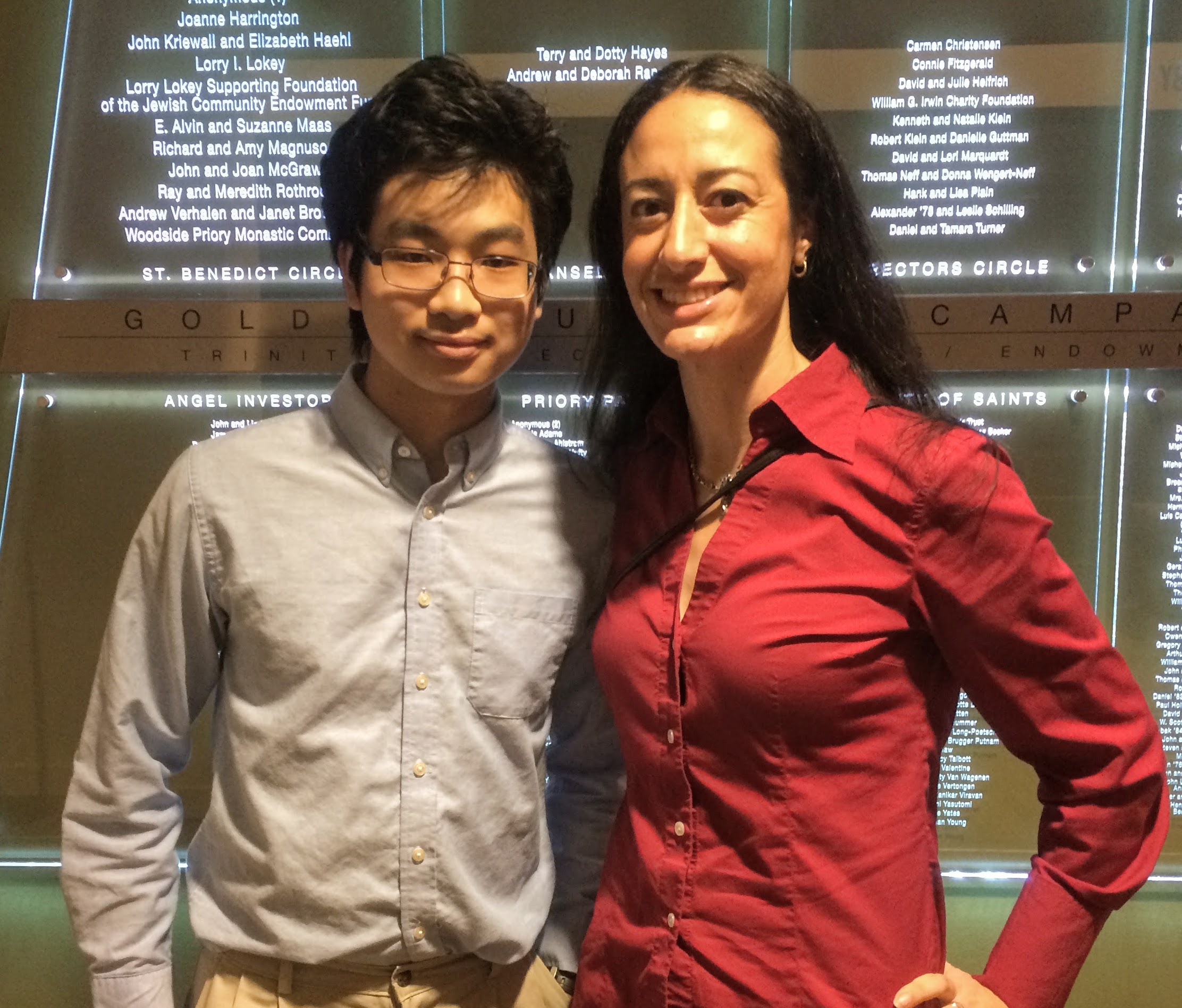 In March of 2017 Founder of TechyKids, Sharon Marzouk gave a Tedx talk on “The Future of Education”.   She was invited to talk by one of her former 8th grade students, Nicolas Tan.  Nicolas was a student of Ms. Marzouk’s at Woodland school, then attended TechyKids camp during that summer.  A few years later Nicolas interned for TechyKids Summer Camp.  Then, later as he was President of his Tedx Club at Woodside Priory, invited her to give a talk.  Nicolas is now in college, studying engineering.

“They get to work with the robot individually or in those small groups and it makes all their learning- problem solving skills, communication skills- all of those things get worked on with the robots,” said Delgado.

Julie Delgado, 5th Grade Teacher loved using TechyKids with Thymio in her classroom, and wrote and was awarded a grant from krtv.com for another robot!  Check out the article

“I learned a lot, it is a fantastic program.  It is like having a scientist/Engineer in classroom with you.  Often in the classroom you are just using the technology, but you don’t understand what is happening.  TechyKids educates students to the inner workings and engineering behind innovations and inventions.

The videos really enlighten and inspire. I like to think that there’s at least one student in each group whose life choices, e.g, career, helping others, will be impacted by what you’ve shared with them. I assigned the video lessons as homework, and they could hardly wait to start their homework.

I had one very social girl stay inside during recess to carry out a plan she formulated using Thymio. She was so empowered.  Also, students are very proud of their earned badges.

I really think the TechyKids program is out of the ordinary, inspiring and meaningful.”

We are loving our Thymio robots in our 9th grade classes. We are using the event based text progamming in Aseba Studio. Kids doing great stuff.
– Mr. Bergman, High School Computer Science Teacher

TechyKids is a great camp to let your imagination go wild.  Learn cool new facts that you would never know otherwise!

TechyKids is a place where imagination is encouraged and failure is just a way for you to improve.  TechyKids isn’t just for kids, it’s for all ages, the coding becoming harder and harder as you go.  If you can’t drive there, there’s online lessons.  Sign up now!

“This summer I went to TechyKids camp.  We got to program Thymio and make things on computers come to life.  Sharon Marzouk is helpful, nice and always lets you do what you want to do and is it is also said clearly she is the best scientist on the planet.”

Some background: Maker Faire 2014 a girl named Normandy came and visited the TechyKids booth on Saturday. She spent hours at the booth playing and then learning to program Thymio.

After being there for hours I was sad to see that she had left without saying bye. Well, she came back a few minutes later with a friend, to then teach her programming. Normandy spent the WHOLE DAY with us on Saturday! When Maker Faire was closing we said bye to Normandy.

Well, the following day, Normany CAME BACK, first thing in the morning! She had her dad with her this time and he had heard how she spent the entire previous day at the faire at our booth, so gave her a 20 minutes more to be at our booth on Sunday so they could see the rest of the Faire. And when the time was up, he looked at his watch and said OK, time to say goodbye and see the rest of the faire, you promised! To which Normandy reluctantly said ok… and then whispered to me with a smile…”I’ll be back!”

“My 8 year old finally got a Thymio for Christmas. She’s wanted one since Maker Faire 2014. She loves her Thymio and has even named it Poppy. The sticky note says, “It’s amazing how one speck of hope can go so far”. -Lysa Marie Filcek

I was delighted!  And the best part is the following year, Normandy came back to Maker Faire and volunteered at the TechyKids Booth!

Thank you for teaching me so much about robots and computer programming.  I now feel confident around programming in code and feel like I could take on any challenge involving Thymio and programming in code.  I have learned so much this year and it wouldn’t have been possible with any other teacher.  You have taught me so much about problem solving and finding solutions.  The stuff you teach me also helps me in other classes such as math and humanities.  I now know so much about technology and how to effectively work in a group.  You have had such a big impact on me and the rest of the students attending Woodland.  I have learned not only about Thymio but learned how to be a great advertiser.  You have taught me a lot about how to advertise your product and I can almost feel my brain expanding.  I have also learned how to make an amazing iMovie about my project (Explorerbot) and it has been a joy to be in your class.  Thank you for teaching me all the amazing things I have learned.  Sincerely,

You are the best teacher ever.  You were the one who got me interested in programming.  Now I do a little bit of programming at home on javascript and I’m going to a programming Minecraft camp this summer.  I remember in summer camp last year, you taught me coding.  I could not stop coding until you made me go to recess.  After recess you taught me iterations which really got me into the programming world.  Thanks to you, I really feel like a programmer.  See you at the Maker Faire.

From parent who brought daughter to camp summer of 2014, from 2 hours away and stayed in a motel locally, so daughter could attend camp!

We attended TechyKids Robot camp.  Elizabeth and I attended last year.  It was a great experience.  Some other families might like this.
The woman that puts this on is a teacher in the local district down in the bay.  I found the environment safe and well controlled.  The class covered not only programming, but creativity, invention and presentation.  Each day the kids learn skills to program the robot.  Then they use Legos and crafting skills to create some invention.  Then the use google apps to create a logo and a power point slide deck.  Last year they also used a green screen and Google docs to script a movie.  On Friday the teams present their work to the parents.
-Bob Perrin

We purchased three Thymio robots in Feb 2015.  They are pretty much always checked out.  As of May 2019, more than 4 years after purchase, we can say that these robots have held up quite nicely, and have been a very popular checkout item in our catalogue.  It is the most robust robot we have.  Each robot has been checked out 40-60 times for a period of 2 weeks. – Nathan, Livermore Library